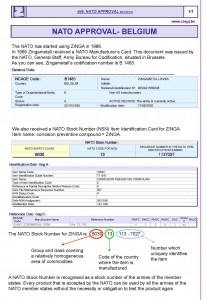 In 1989 ZINGA received a Manufacturer’s card and a NATO Stock Number for ZINGA.  This document was issued by the NATO, General Staff, Army Bureau for Codification, situated in Brussels.  A NATO Stock Number is recognized as a stock number of the armies of the member states.  Every product that is accepted by the NATO can be used by all the armies of the NATO member states without the necessity or obligation to test the product again.